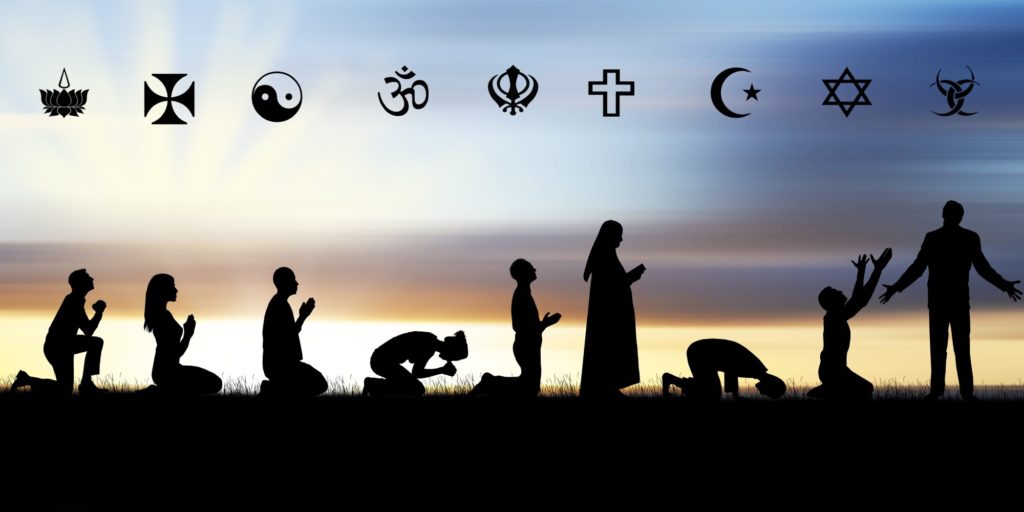 Have you ever stopped to consider the question: what is religion? I don’t mean is it Christianity, or Judaism, or, Buddhism, or even New Age spiritualism. Those usually form part of another question: which is the true religion? But what exactly is ‘religion’ itself when you strip away its many forms.

So is it possible to ‘have a religion’ without a belief in a god or gods? There again, what is belief? Where does it come from? And where exactly does ‘faith’ come into this equation? After all, virtually all religions demand a degree of faith. It’s the mortar that holds those bricks of belief together, preventing them from crumbling away. Priests and clergy, mullahs and rabbis, are like religious bricklayers repairing the mortar and making it strong again.

Why do we have a belief system, and do we really need it? So far as we know we’re the only living creature aware of our eventual earthly demise. Is our belief system merely there to comfort the dread of our mortality? Probably not, though it can certainly help in that direction.

Of course, it can be argued that belief is not just about religion. In fact, our beliefs are often extremely malleable. How many young men through the ages have marched off into battle because they’ve been glibly persuaded by some emperor, king, or politician, that they’d be ‘serving their country’, ‘fighting evil’, or, ‘doing the will of God’, when in reality they’re simply serving the purposes of their political leadership.

Belief systems support whatever or whoever we want them to, from the team of our local football club to the next President of the United States of America. Amazingly, once that belief is established in the human mind it can be very difficult to shift. Even the most hardened of atheists may be caught out praying if caught in a life-threatening situation.

Another noticeable example of late has been the vast and solid support by those struggling, financially-crippled Americans, for a president they voted into office on the promise of restoring their livelihoods and well-being, only for him to direct wealth away from them and into the coffers of the already rich and powerful. Yet still their adoration knows no bounds.

Political belief systems today are well supported . No priest or rabbis here, but cleverly disguised political propaganda blown around by the winds of media like so many dandelion seedlings on a spring breeze. A TV channel for every belief system, repairing the mortar and sticking those political belief bricks back in place.

But a belief system, of whatever persuasion, is more than just mental bricks and mortar. It needs leading, promoting; like-minded believers to make you feel you’re in a supportive club, and someone, or something, to admire and look up to. It may be the quarterback of your local team, or a politician promising a brighter future – or, what better than an invisible super being welcoming you to an eternal heavenly existence? And, the rougher your life on earth, the better you’ll be be once you’ve shuffled off this earthly plane.

It’s hard to see harm in being a devotee of your local football team. Politicians, however, are (and always have been) some of the finest snake oil salesmen (and women) ever. Their job is to convince your belief system they’re better for you than the opposition. But what of God? Have the churches been the super snake oil salesmen of all time?

Before answering that question it’s first necessary to ascertain whether ‘God’ (or, indeed, gods) actually exist. If ‘He’ doesn’t, or ‘They’ don’t, then we’re looking at the finest, the most unscrupulous yet magnificent, marketing ploy of all time. Given that we’re dealing with something invisible and any communication with it is almost certainly only a product of human imagination, it’s impossible to state with any certainty whether there is any divine being ‘out there’, or not.

Invent an invisible, omniscient, super being with the power to create a wondrous spiritual paradise for us when we die. Make Him a benevolent, gentle, being, but also judge, jury, and possibly executioner if you don’t toe-the-line while on earth. Make access to this paradise easier the harder your life is on earth. Just accept all sufferings, the beatings, the starvation, the disease, the hardships inflicted on you by your earthly masters so they can live in luxury. You’ll get your reward in Heaven. But only if those who drew the lines you have to toe, and inflicted the hardships, beatings, starvation and disease you have to bear, aren’t the ones who invented the whole thing in the first place. Otherwise, you’ve been conned into putting up with all that abuse and at the end of it you’re dead. Period.

So what is religion? A glorious, eternal, afterlife full of ill-defined goodies? Or the greatest confidence trick there’s ever been?

I’ll leave it up to you. Or you can, of course, just sit back and let your belief system decide for you.

4 Replies to “What’s Your Belief System Telling You?”