Those now in control in Iraq seem hellbent on exterminating all of their old enemies. The BBC reports today that Iraq’s deputy prime minister under Saddam Hussein, Tariq Aziz, has been sentenced by an Iraqi court to hang, for indeterminate crimes primarily against the Islamic Dawa party of Nouri al-Maliki. 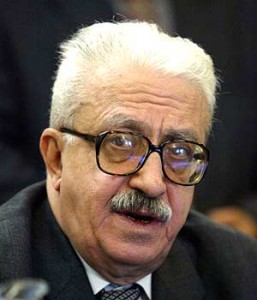 Few can fail to remember the somewhat bizarre bumblings of this man just prior to the US/UK invasion of Iraq in 2003. He became almost a comic icon to many in the West, an Iraqi version of Captain Mainwaring from the BBC TV show, “Dad’s Army”.

At seventy-four, and after at least one stroke, he hardly deserves the punishment heaped on him by his vindictive enemies. Imprisoned in 2003, his family weren’t even allowed to visit for two years, and in 2005 the British newspaper, “The Observer” printed letters from him pleading for help.

It is imperative that there is intervention into our dire situation and treatment … We hope that you will help us. We have been in prison for a long time and we have been cut from our families. No contacts, no phones, no letters. Even the parcels sent to us by our families are not given to us. We need a fair treatment, a fair investigation and finally a fair trial. Please help us….[1]

According to Al-Jazeera today:

…..the charges against Aziz are related to a crackdown on an uprising led by Shia Muslim parties in the early 1990s. Among them was the party of Nouri al-Maliki, the current prime minister, who at that time carried out an attempted coup against Saddam Hussein.”[2]

Aziz’s lawyer, Badee’ Aref, stated that “sources inside the court told him three of the judges did not approve the sentence but were forced to sign it.”

After seven years of bloodshed and innumerable lost lives – both Iraqi and Westerner – it seems little has changed in Iraq. Maliki is determined, apparently, to become the next Iraqi dictator. To suggest democracy exists in that country is a farce. Seven months after the last election there is still no stable government in power.

Back in March 2010, just days prior to the Iraq election, Michael Hastings wrote in “The Daily Beast”:

I suspect we could be seeing Iraq’s final gasp of democracy this weekend, a last purple-fingered salute before the country slips back into a more familiar authoritarianism.”[3]

He is about to be proven correct in his prediction.

Tariq Aziz will undoubtedly be executed. It’s almost a forgone conclusion. He has no influential friends left. Aziz was Saddam’s main man in the “Oil-for-Food” program. He knows the names of all the foreign diplomats and politicians involved in that corrupt scandal. He has never named them, even under interrogation.

Now, they know he never will.

One Reply to “Stop This Senseless Killing!”