The horror and indignation spouted by media, politicians, and those who consider themselves of higher-than-average moral caliber, at the sight of US soldiers urinating on their dead Taliban enemies[1], is yet another smokescreen cast to hide the real truth of life and death on the battleground. 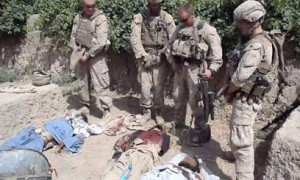 Politicians and others, who require we lesser mortals carry out their dirty work, have long perpetuated the myths of honor on the battlefield, respect for one’s enemies, and the jolly old ‘derring-do’ so prevalent in 20th century boys’ comics.

The reason is all too obvious. War has to be marketed as glamorous and glorious or no-one would do it. No soldier joins up because he wants to be killed, or even accepts he will be – until, of course, he’s suddenly thrown into a war-zone and the realization dawns that it may become a distinct possibility.

Over the last decade, the internet has revolutionized how the public receives information from a warfront, and the American military has had numerous opportunities to exhibit for us the true horror of war. They’ve succeeded splendidly. The atrocities at Abu Ghraib, Guantanamo Bay, and Falluja, are just a smattering of the many horrific acts they’ve displayed for our attention.

This latest act of inhumanity – urinating on those they’ve killed – seems decidedly trivial when compared to the slaughter of innocents regularly perpetrated on the Afghanistan/Pakistan border by those US officials of much higher authority, who sit comfortably in their air-conditioned offices, sipping pina coladas, while guiding pilotless drones to blow up tiny children, young couples about to marry, or women shopping peaceably at a market. But it’s okay to do that. After all, the innocent victims don’t matter. They’re not Americans, are they?

Let’s not lay all the blame at the door of America, though. It’s unfortunate a century that’ll be remembered for its technological advances in communication occurred just as this nation was reaching its most barbarous. Other nations have had their day, and there has never been any war free of atrocities on either side.

In days gone by, many war crimes passed unnoticed, undocumented, the truth only materializing years later. But those that were publicized never failed to draw forth the self-righteous bluster and hypocrisy of the political elite.

Some may consider it strange that war breeds such inhumanity, expecting the human species capable of rising above base, animalistic, tendencies, and none seem so shocked and outraged as those responsible for perpetuating wars.

Perhaps, instead of focusing our distaste on the soldiers who urinated on their dead enemies, we might do better to turn our disgust towards those in power, they who so quickly utilize the media to publicly display their mock outrage, for it is they, indeed, who are the true perpetrators of all war’s inhumanities.