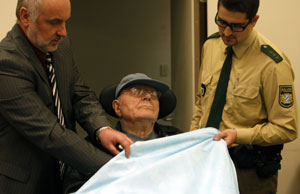 John Demjanjuk is 89 years old and in frail health. Today he was wheeled into court on a gurney to stand trial in Munich for crimes committed sixty years ago.

Then he was charged with being ‘Ivan the Terrible’, a notoriously brutal Nazi death camp guard from Treblinka. He was found guilty and sentenced to hang.

He was on death row in an Israeli jail for five years until further evidence came to light proving his innocence of the charge. He returned to the United States.

Now, at the end of his traumatic life, he’s once again charged with war crimes; this time, as an accessory to murders committed by the Germans at Sobibor death camp in Nazi-occupied Poland.

Demjanjuk denies he was ever at Sobibor.

Maybe he was; maybe, he wasn’t. Either way, is anything to be gained by dragging this sick old man through more legal proceedings?

The answer is a resounding, “Yes!”

It will prove once and for all what we have become.

Filed under: “As we forgive them….”

3 Replies to “What Have We Become?”