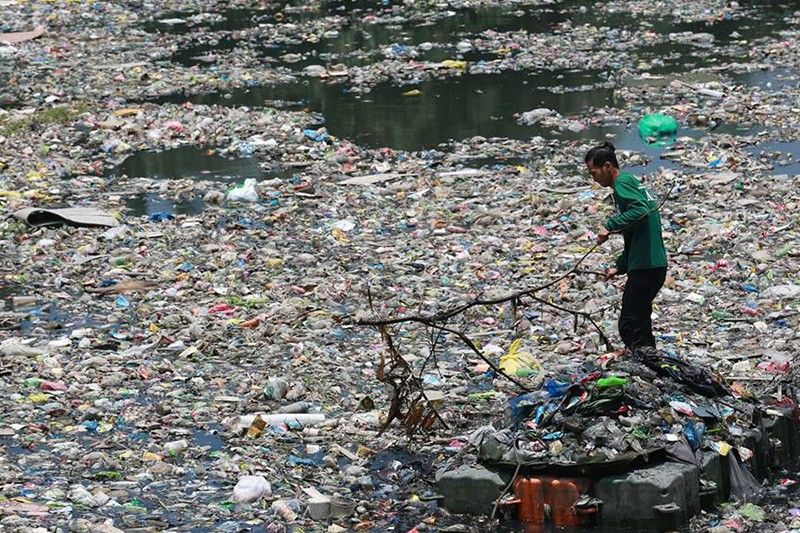 Trash collectors comb through a sea of garbage dumped into the lifeless San Juan River in Mandaluyong City on April 19, 2018. Plastic pollution is a major problem in the Philippines, which is listed among the world’s worst offenders.

No, you’re quite right. There’s not been much action on Sparrow Chat for quite sometime now. To be honest I’m so sick of what’s going on in the world I just can’t be bothered to write about it. When you boil it down there’s only one problem in the world, and that’s the human beings who inhabit it. This planet was ticking along very nicely for close to four billion years, and then we arrived.

The planet’s had a few hiccups along the way, but they weren’t all bad. Getting shut of the dinosaurs was probably a good thing. Who wanted those great monstrosities strutting about eating everything in sight. But look what the planet got in exchange: seven and a half billion rampaging individuals hellbent on ransacking their own home just so they can have every darned thing ever invented to make them lazier.

There’s been a glut of TV programs of late about people who can’t, or won’t, keep their houses clean. They stuff them full of every conceivable piece of junk they can lay their hands on. TV cameras go in with people who seem to think they’ve got some weird talent for cleaning up a house, and call it entertainment. It became so popular with viewers, suddenly almost every channel had similar programs running, all competing for the dirtiest, filthiest, properties with the saddest, most inadequate, inhabitants.

Why is that entertainment? How low have we sunk that we can slouch on our sofas with our cans of lager and watch sad people being humiliated in front of us, and kid ourselves we’re being entertained?

Even sadder, and more hypocritical, is that what we are seeing on television is merely a reflection of what we are doing to our planet, our home. We’ve trashed it so much, filled it so full of rubbish and junk, killed off so much of the natural world we once lived with, that we’re causing our atmosphere to become poisoned to such an extent the planet can no longer breathe properly and support us. It’s heating up to a degree that’ll eventually consume all its rubbish, including us, by fire.

Imagine for a moment watching a clean-up programme on the TV, but instead of the ‘cleaners’ setting to work to sort out the detritus, they just turn away and say, “We can do nothing with this, it’s too bad.” Then they take a match and set the house on fire. The camera crew rush outside and film the property as it burns to the ground.

“Ah,” we think from our sofa, with our can of lager, “Now that’s what I call entertainment.”