Risking accusations of anti-semitism (and, let’s face it, there are times when someone has to) it’s little wonder the Jewish people face constant criticism for their arrogant, high-handed attitudes.

Let me make it crystal clear, I’m not talking the ordinary Jewish man or woman in the street, whether that street be in America, Israel, or anywhere else on earth. I’m referring to the wealthy, powerful, Israeli-connected, Jews who will trample anyone’s sensitivities to get their own way.

Whatever one’s view of Simon Wiesenthal’s obsession with bringing to justice those responsible for the Nazi atrocities of WW2, it’s difficult to criticize him. If I’d suffered the pain and indignities he went through at Janowska, Plaszow, and Mauthausen concentration camps during World War II, I can’t say with certainty I wouldn’t have followed a similar course.

When ultra-wealthy American Jews build a center in Los Angeles and name it after him, however, one might expect it to follow a certain standard of ethics.

It doesn’t. At least, not in the case of its latest venture.

It’s reasonable to expect a $250 million dollar complex labeled, “The Museum of Tolerance”, to show a little of that tolerance when it comes to siting the building, especially when the city designated for its construction happens to be Jerusalem.

Not a bit of it. The super-rich American Jews of the Simon Wiesenthal Center responsible for the project are intending to build it slap bang in the middle of a Palestinian Muslim cemetery.[1]

Forgive me if I appear naive, but that seems a trifle in-tolerant.

In fact, its a degree of intolerance in keeping with the general intolerance of the Israeli government towards all things Palestinian, which leaves one with the distinct impression that Israeli and US politicians are hand in glove when it comes to not treating the Palestinians with any degree of fairness and humanity.

Could this have anything to do with human arrogance? After all, for God knows how many generations the Jews have been indoctrinated into believing they were the chosen ones of Jehovah. (Psst! It says so in the Bible, so it must be right). Americans, on the other hand, have only believed this about themselves for the last three hundred years or so, but long enough to have a very noticeable effect.

As both nations view the rest of the world from the top of very tall ivory towers, the culture and history of the peasants beneath obviously appear unimportant when God’s “Chosen” decide to erect their glorious “Museum of Tolerance”, as a permanent symbol of intolerance.

Frankly, not only would I not want it slap bang on top of my granny’s grave, but I’d rather it wasn’t even in my city. 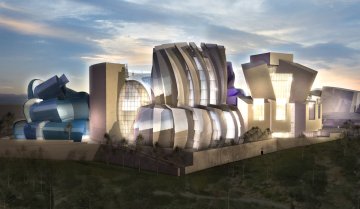 Filed under: If the jackboot fits