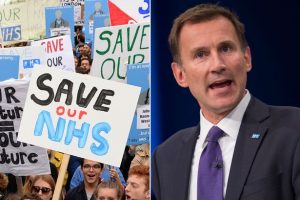 Politicians are amazing people. They are born with an innate ability to lay the blame for their failures on others. It’s never them, it’s the unions, or the workers, or the ‘other political party’, or possibly ‘Mrs Jones down at number 37’.

Health minister Jeremy Hunt tops them all. His attacks on the junior doctors of the UK’s National Health Service are vitriolic, simply because they refuse to comply with an unfair contract he’s trying to force upon them.[1]

That old standby, “Patients will suffer”, is trotted out on every occasion, as though the doctors have suddenly turned into cold-blooded, unfeeling, automatons overnight.

It’s time Jeremy Hunt realised the blame for the state of the NHS lies at his door. He’s an out and out failure. He couldn’t even sell marmalade to the Japanese[2]. It’s time he resigned, and was replaced by someone who actually has a knowledge of how a national health service should be properly run. Jeremy Hunt knows less about hospital management than a cashier at Argos.

It’s time the staff made a real stand against Hunt’s demolition of the NHS and joined doctors in an all-out walk-out. It’s about the only way to persuade David Cameron to get rid of this pretentious idiot once and for all.

There’s only one person to blame for the present state of the NHS and the buck stops at Jeremy Hunt.