The NRA annual get-together this week appeared like a Who’s Who of the top idiots in America. Topping the bill was the United States’s second favorite, right-wing, nutty talk-radio host, Glenn Beck.[1]

Hasn’t the, “From my cold, dead, hands…” bit, been done already?

It might have passed off like most other NRA conventions – that is, hardly noticed by the saner elements of society – had not the whole show been eclipsed by one five-year old from Kentucky who chose just the right time to shoot dead his two-year old sister, with his very own .22 caliber rifle.[2]

Surprisingly, it’s illegal in America for a toddler to walk into a gun store and purchase a firearm. It’s perfectly acceptable, though, for an adult to purchase a rifle, or, conceivably an AK47, and present it to a five-year old as a birthday gift.

Whether or not parents who give toddlers lethal firearms to play with should be certified as criminally insane and locked away forever in a mental asylum is not for discussion here. Suffice to say, if you’re any nationality other than American, the answer to the question is patently obvious.

Remember a time when this was the birthday present of choice for a toddler? 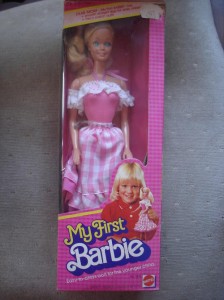 Now, it’s been replaced by this:

Keystone Sporting Arms, makers and marketers of Crickett and Chipmunk firearms for toddlers (available in certain Walmart stores) have remained silent about this latest killing. Much was made of the company pulling its website after the event, but it’s now up and running again.

Obviously, the owners – Bill & Steve McNeal of 155, Sodom Road, Milton, Pennsylvania (no comment on the aptness of the address) – have no further wish to lose sales.

The NRA failed to officially recognize the incident in an attempt to make it go away and not spoil their little gathering. One guy determined to help this happen is Cody Wilson, founder of Defense Distributed in Texas (where else!) who chose this week to announce his latest invention: an all-plastic, thoroughly lethal handgun fashioned on a 3D printer. Cody intends to publish the plans on the internet.[3]

“I recognize that this tool might be used to harm people,” Wilson told Forbes. “That’s what it is — it’s a gun. But I don’t think that’s a reason to not put it out there. I think that liberty in the end is a better interest.”

Liberty? The freedom for any terrorist to carry one of these non-metallic weapons through airport checkpoints unnoticed, board a plane, and commit another horror like that of 9/11/2001?

That’s just the kind of liberty Cody Wilson, Bill & Steve McNeal, and the NRA strive to achieve in today’s America, and they begin by brainwashing the youngest and most vulnerable.

Perhaps the next invention of liberty might be printed, plastic, pressure cookers – an ideal device for the would-be, home-grown, terrorist bomber?