Oh, Mister Cruz, you sank your last hope this week. You torpedoed your own ship.

And here’s the warhead you used to do it: 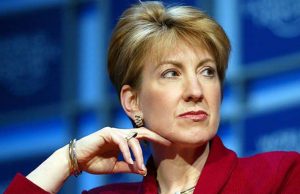 This woman should never be allowed within viewing distance of the White House, least of all, inside as Vice- President.

Still, let’s look on the bright side. If there has to be a lunatic like Trump in the White House, he’s marginally better than an obsessive religious nutter like Mister Cruz.

After all, America’s used to mentally unstable presidents: Richard Nixon, George W Bush…it’s really not necessary to go on.

Trump versus Clinton now looks a safe bet for the Presidential campaign. Unless, of course, Bernie Sanders can pull off a miracle.

You never know, it’s the official United States ‘National Day of Prayer’ tomorrow. Perhaps if everyone wrote their letters to God and posted them up their chimneys, He might just give Bernie a helping hand.[1]