I wouldn’t necessarily recommend becoming a hermit, but after spending over a week in an empty house on forty acres of very private Michigan woodland, the craziness of so-called ‘normal’ life can hit you between the eyes, when you eventually return to it.

Redecorating the main living room of our eventual retirement home was akin to a monastic retreat, in more ways than the obvious (my wife remained in Illinois). The house is all but shut up, and though it has a working telephone there’s no television or broadband services available.

Consequently, apart from the NPR news over breakfast, provided by the local PBS station via an aging boom-box once my wife’s pride and joy long before we were married, and enough dial-up internet to send the occasional email, I was well out of the civilization loop, and thoroughly enjoying it.

All good things come to an end. Last week I returned to Illinois and the dubious advantages of cable news and broadband internet. Suddenly, the world was mad once more. Or, at least, the bit of it that calls itself, “America”. Impossible to avoid, a swift infusion of the madcap political insanity rolling across this nation like some filthy re-run of the dust storms that destroyed so many lives back in the 1930s, hit me as a bolt of lightning right between the eyes.

Only a few days before it had all seemed so far away; so unreal.

A Muslim community center used for political gain simply because it was only a few blocks away from the site of the World Trade Center; a jury unable to decide the guilt of ex-Illinois governor, Rod Blagojevich, even though the whole world heard the tapes. Today, the symbol of American troops leaving Iraq: an unshaven lout of a soldier hanging out the back of a truck shouting to the world:

Tell me what you won, soldier. Please give me some idea what it is you believe was worth the million or so dead you’re leaving beneath that Iraqi dirt? What was your great conquest, soldier?

And, if it was so good, why are fifty thousands of your comrades staying behind?I notice the oil’s all gone. When I left for Michigan the Gulf of Mexico was an environmental disaster. Millions of barrels of oil poisoned the sea. Where’s it gone? Obama broadcast a plea for tourists to return and enjoy the pristine beaches, gorge themselves on fresh-caught lobster and shrimp. Special government agents sniff the catch for any whiff of contaminant.[1]

Did it all obligingly melt away? Or, has the “Ground Zero Mosque” just become a better story?

Pakistan is suffering its worst flooding ever. Of course, it’s not climate change. That was just a ruse of the scientists to get more money. And, it’s nothing to do with man’s pollution of the planet. After all, the fact there’s a plastic rubbish dump twice the size of the continental United States floating in the middle of the Pacific Ocean is nothing to do with us, is it?

It’s important we eat more healthily, though. There are far too many Americans obese from eating the wrong food. That’s why dear sweet Marie Callender – you know, that motherly figure who’s been making good wholesome food for Americans since 1948 – has just brought out a new line of health-giving ‘steamer meals’ like this Chicken Stir-Fry with Vegetables. 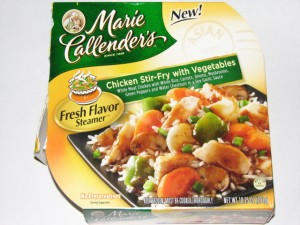 Only, here’s the rub: Marie Callender doesn’t really exist. She’s a figment of someone’s imagination, rather like Santa Claus and Jesus Christ. This product is made by the giant multinational food corporation, Conagra, known for a number of ethical and environmental issues.

It was a Conagra plant that caused the recall of nineteen million pounds of beef in 2002, because of E. Coli contamination; in 2007, Conagra was forced to recall Peanut Butter products after 628 people across 47 states were stricken down with salmonella poisoning; until 2007, Conagra used diacetyl in the manufacture of its popcorn butter products, despite known health issues with this chemical since 2000; also in 2007, Conagra was forced to pull thousands of its pot pies from stores after they were found to be contaminated with salmonella. 217 individuals across thirty-five states became ill from eating them.

Conagra uses large quantities of genetically-modified ingredients in its products and was once described in Multinational Monitor as one of the “‘Top 100 Corporate Criminals of the 1990s”.[2]

Still, perhaps Conagra is redressing the balance a little with its latest batch of new ‘steamer’ health foods?

Except, every meal comes complete with, not one, but two rigid plastic containers that are perfectly designed to float happily around on the Pacific Ocean until time immemorial.

4 Replies to “Back To Reality”