The ‘madness of America’ is well-interpreted by much of the rest of the world. ‘Only in America’, is a slogan commonly used throughout Europe. The likes of Glenn Beck or Limbaugh would never be tolerated in the UK, France, or Germany – not because of any restrictive political regime, but simply that European folks demand higher standards from their media.

The latest ‘madness of America’ took place recently in the state of Utah. One would expect a state founded by a sect with the name “The Church of Jesus Christ of Latter-day Saints”, to be aiming towards unity and peace. After all, that was what Jesus Christ taught, according to the Bible.

Utah is certainly taking aim, though hardly in the cause of unity and peace. It has recently added a new state symbol to its already lengthy list, comprising: a state bird (seagull), a state fossil (allosaurus), a state fruit (cherry), and a state gem (topaz), among others.

They’re all relatively harmless little items, suitable for occupying the limited brains of politicians on a hot Utah afternoon, while wiling away the time in committee conjuring yet another innocuous article to add to the long list of ‘official’ state symbols. After all, they need to justify their high salaries, and kill time till the first club brandy of the evening.[1]

Now, however, it would appear one brandy too many has pickled the brains of Utah’s political community. Someone has come up with a new state symbol.

After the prerequisite debate, the committee took a vote and approved THIS as Utah’s latest addition to its list of state symbols: 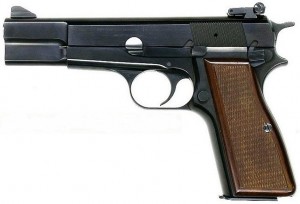 Yes, it’s a gun. The Browning M1911 has just become the official state gun of Utah.

3 Replies to “And They Said King George Was Mad”